ECM has three types of directivities. According to its polar pattern, it can be divided Omni-Directional/Uni-Directional/Noise Cancelling. And the Omni-Directional microphone is the one that is used in the world commonly, the usage rate of noise-canceling type is low. When it is necessary to eliminate the noise in the rear direction, the Uni-Directional Mic is usually selected. Its receiving directivity waveform is similar to a heart shape. Uni-microphone usually used in car hands-free calls/ headset Boom microphone/ telephone headset Boom microphone/ conference call system, to reduce the noise of microphone with an angle in 180 degrees, the attenuation of the directivity at 1KHZ with an angle 180 degrees is generally up to 15dB, which can meet general consumer noise reduction purposes (Fig.5.1).

The reason why the uni-directional microphone can be directivity, the most important parts are the hole behind the microphone and the internal hole's material of the damper, these two structures will have an acoustic resistance effect, so the sound from the angle 180 degrees will pass through the acoustic resistance material. To reduce its moving speed and reach the diaphragm simultaneously as the sound that bypasses the 0-degree sound hole on the front. The diaphragm has the same pressure wave and the diaphragm will stop vibrating, so there is no output signal, the sound will attenuation in the angle 180-degree that direction has achieved. And the formation of directivity characteristics. (Fig.5.2). 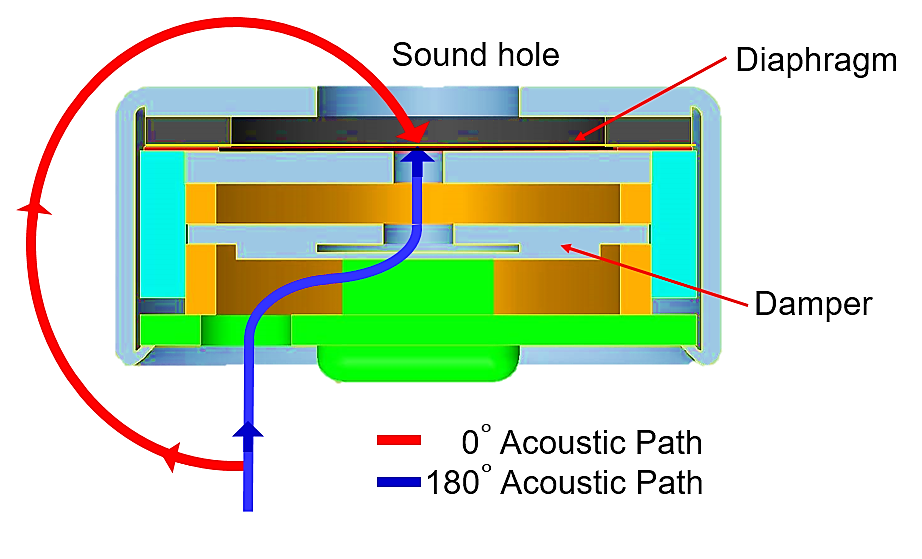